The Gorge Walk at Point Lookout is a must for all visitors to the island. This gentle walk offers outstanding views across the ocean and is an ideal vantage point for spotting marine life such as turtles, dolphins and manta rays.

The best time for the walk is the morning when you can see the Sunrise from the left section of the walk, the start. It is here too that the wallabies and kangaroos collect, and wait as the morning begins when they go south to cooler and shadier places.

The first morning I was there, I was treated to 8 kangaroos and two males having a fight, and then a whole pod of dolphin down below clapping and dancing in the water.I was not able to get a clear photo of the dolphins, but it was a delight to see them enjoying themselves playing in the water. You could hear the clapping quite clearly, and it wasn’t until I read the notice board that I realised I had been listening to them calling and clapping in the water. 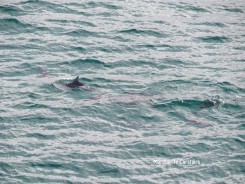 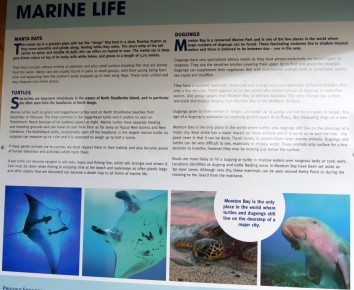 The Gorge walk is 1.5 kms, and you climb up the path and the steps to see the gorge below. Walk on the rocks and see the turtles and mantas playing in the clear waters below in the gorge cut out in the middle of the walk. Then you walk across to the other side and walk along the gorge on the opposite side.The gorge is constantly fed by water and waves. At high tide it is almost full of water and at low tide, there is sad below. 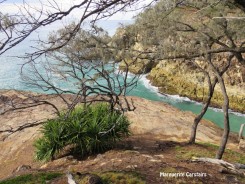 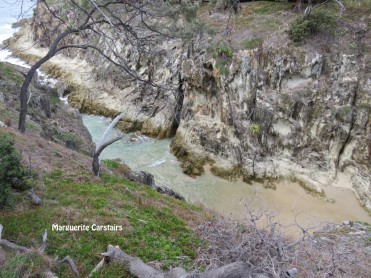 As you walk up the steps you can hear the mournful howl of the Blow Hole when the winds catch the hollow flute and the rocks groan out their protest to all who listen. There are steps down to the blowhole and in winter one can see the water spouting out of the hole in the rocks. 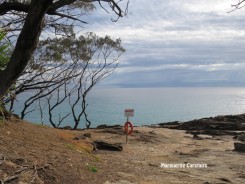 From here you can see the dolphins and the whales when they are migrating. Whales have great memories and they have avoided Stradbroke Island because of the whaling station at Moreton island and the whaling industry. However, recent years have seen the return of whales to Stradbroke as if they know the waters are now safe from whaling. This is bringing increased tourists to the Island during the whaling season when the whales migrate north and then return south back to their home in Antarctica.

For millennia, the islands have been the home of indigenous Aborigines until the arrival of Europeans. There is some speculation that it was the Portuguese that made first contact with the area. Although no concrete evidence now exists as to the whereabouts of the wreck of the Portuguese galleon, early local maps marked a spot where such a ship was supposed to have founded in the early 1600s. Several sightings of the wreck have been recorded and there are stories of artefacts being removed. This wreck, if it had existed, was connected with North Stradbroke Island.

What we do know for certain is that Lt James Cook sailed past these islands in 1770 and gave the name to the most northerly of them. He named it Morton Island after James Douglas, 14th Earl of Morton. Cartographers later misspelt the name by labelling the island Moreton.

Matthew Flinders followed in 1799 and, because of a confrontation with the local Aborigines on Bribie Island, named the place Skirmish Point.

John Oxley arrived in 1824 with convicts to set up a settlement at Redcliffe. The following year the settlement moved to a site inland on the Brisbane River. Moreton Bay as a place of incarceration continued until 1842 when the area was thrown open to free settlement. With that, migrants flooded into the area. 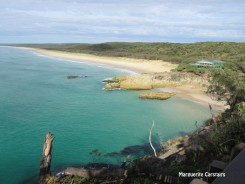 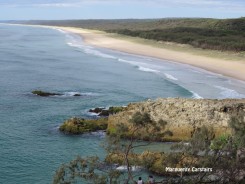 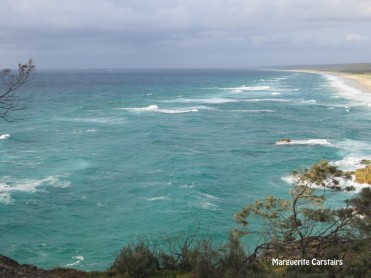