John Guzzwell made yachting history when he sailed back into Victoria, B.C., in 1959 aboard Trekka. He had set a record for the smallest boat on a solo circumnavigation that stood for many years. In recent years several sailors have set out to break his record and at least one has succeeded.

The amazing story of Howard Smith who sailed this 2.7m yacht across the Pacific. When he got to Australian the Australian Customs fined him $2,000.00 which he did not have. They gave him a tourist visa for 3 months, but he could not get the cash to pay for his fine…he tried to sell the yacht to the Maritime Museum, and eventually tried to give it to them, but customs would not free the vessel. He was deported back to Canada. In 1988 during  Expo, Customs gave the vessel to the Museum, and they have restored it to its former glory.

Where is Howard Smith today? He would love to know that is vessel is safe and well, and he also should get some glory for his amazing trip…..Is he still in Canada?

Here is the story from Benford, the boat Manufacturer.…When Howard Wayne Smith came to us in December of 1977, he was a crewman on a tugboat on the Canadian West Coast. He’d been reading and planning his new boat project for some time. His dream was to create a distinctly smaller boat to break the record set by his hero, John Guzzwell.

However, Howard Wayne Smith was a determined adventurer. With the aid of an aluminum builder in Noumea, he put together yet another miniature offshore yacht. Economics and record-breaking tables ever in mind, the Happy II came from our drawing boards at 9 1/2 feet. Howard felt that his most-used space on the 13′ 10″ Happy was really the equivalent of the space he had available in the smaller vessel. He had to mainly forego stores-carrying ability and speed.

Howard’s story of working his way from the idea for a solo circumnavigation in such a small craft through the design, construction, transportation and sailing phases is highly entertaining. He writes in a personable style, and a number of magazine and newspaper articles by and about him have been published around the world. His plans include a book or two and we’d recommend the reader keep an ear out for news of these if stories of adventure, determination and skill are of appeal. Excerpts from some of his early writings follow:

“Once Jay and his young associate, Peter Dunsford, heard more of the story and saw my preliminary plans, their eyes lit up and they were tossing ideas back and forth a mile a minute. They were enjoying themselves. I sat there fascinated. Realizing that this might have been the last time I could go custom with a boat, I wanted to go all the way: all wood, with lots of varnish and bronze, tan bark sails, etc. I had been thinking in terms of single carvel or strip planking for the hull, but Jay immediately informed me that for my size vessel, these were too heavy a medium, and we’d have to go with a cold molding method…Well, we talked for a few hours that day, and I was very pleased when Jay agreed to start work on the design even though he said it would take about three months by trying to squeeze it in with other work.”

“By March, 1978, the design was completed, and as you can see, Happy turned out really nice. Jay did a fine job. I think he really enjoyed himself on this one, as she’s a little out of the ordinary, and that’s his bag really.” … 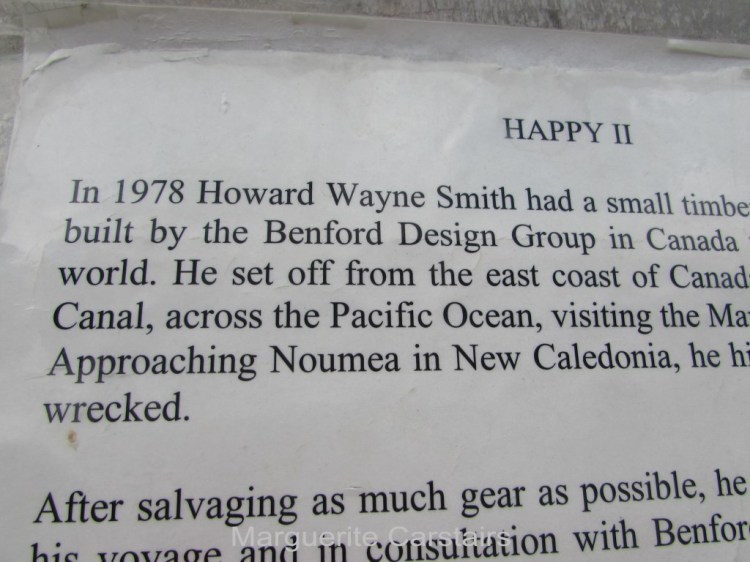 Howard Wayne Smith’s specification to us was to try to get the maximum amount of boat we could in under 14 feet of length. After considering many alternatives, we came up with the plumb ended cruiser shown in the accompanying drawings. Howard wanted everything kept as simple as possible, for each pound of weight would be important.

The designed auxiliary power was a small outboard engine. The locker in the stern was designed to be watertight, sealed off from the rest of the boat. This locker holds the engine as well as the fuel tanks.

The small area of hollow in the keel amidships gives a place for bilge water to collect and makes it easier to pump it out. This is one of the ideas that were incorporated in the design as a result of comments from John Guzzwell.

“Hull speed” is just about 5 knots. Howard wanted to be able to average 3 knots for most of his passage making. The motion on a short and fat boat like this is much better off the wind than bucking to weather. With the NACA foil sectioned keel, she has the lateral plane and lift to sail to weather, but Howard prefers to do most of his sailing off the wind.

The basic hull construction was done by Finn Nielsen at Maple Bay on Vancouver Island. Howard did a lot of the outfitting himself. Most of the construction materials in her are native to the Pacific Northwest, including a lot of fir and cedar. The construction is cold-molded cedar planking over fir longitudinal stringers.