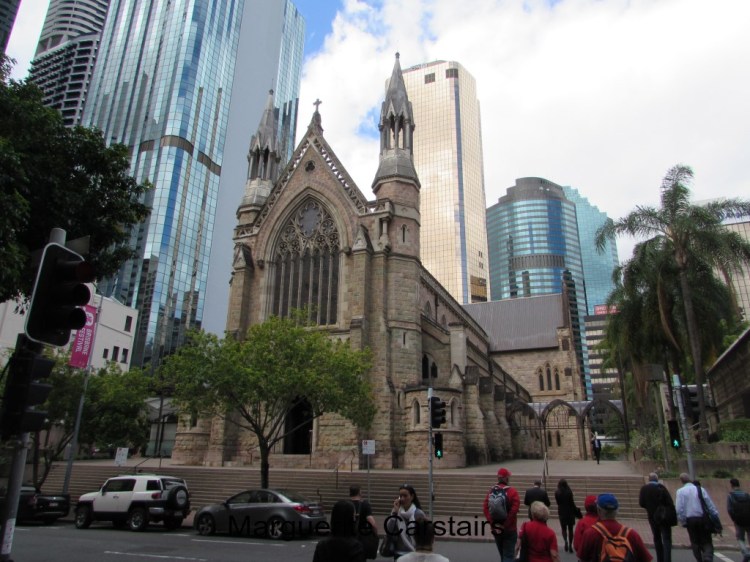 Work began on this little stone church in 1848, using a design of Gothic revival architect, AWN Pugin. Fr James Hanly celebrated the first Mass in the church on 12 May 1850 when there were just sixty Catholic families in town.

In 1859, with the appointment of Bishop James Quinn, Brisbane became a diocese and the church a cathedral. When the new cathedral was opened in 1874 this church became a school room. During the past century it was used for school, church offices and storage, and was several times threatened with demolition.

Based on painstaking historical research and heritage reports, the bell tower has been rebuilt, the stone tracery in the windows reconstructed, and a timber shingle roof reinstated. In fact, it has been enhanced with treasures our ancestors could not have imagined: the West window is now filled with magnificent stained glass depicting Christ in glory and the story of St Stephen. The building will take its place in the cathedral precinct which serves as an oasis for shoppers and workers in the midst of a busy city. 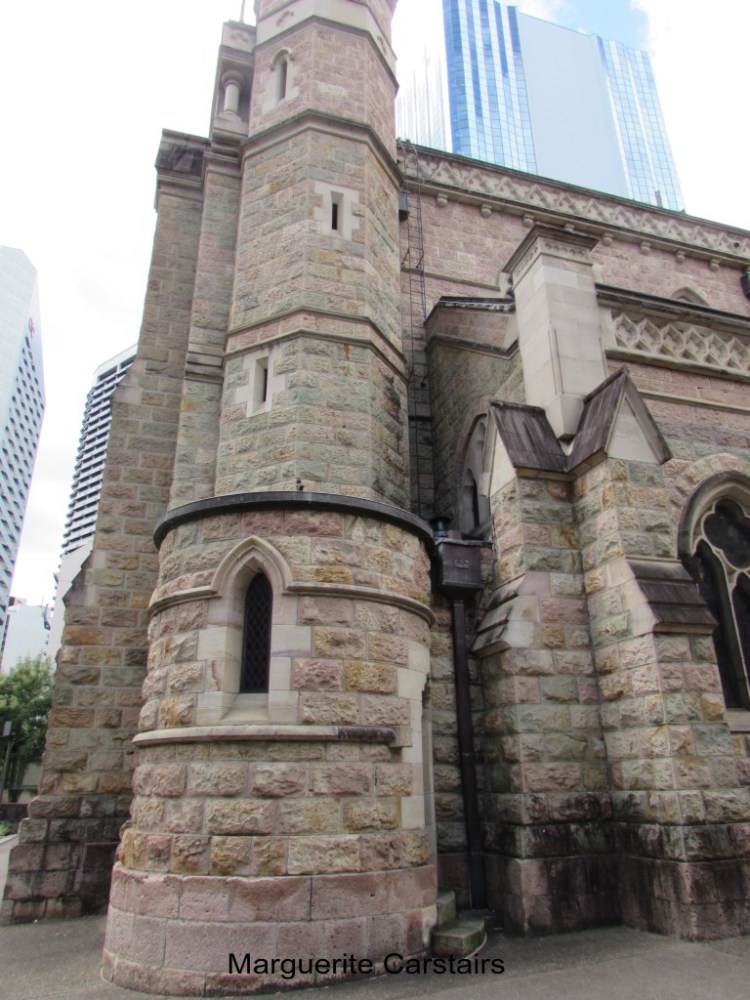 The Cathedral of St Stephen is the cathedral church of the Roman Catholic Archdiocese of Brisbane and seat of its archbishop, the Most Reverend Mark Coleridge.

The cathedral is located on a site bounded by Elizabeth, Charlotte and Edward Streets, in the Australian city of Brisbane, Queensland. Built between 1864 and 1922, with extensions made in 1989, the cathedral was established with James Quinn as its first bishop. Quinn planned to construct a large cathedral to accommodate a growing congregation. On 26 December 1863, the Feast of St Stephen, Quinn laid the foundation stone for a grand cathedral designed by Benjamin Backhouse.

The cathedral currently has three choirs, which perform in the liturgical-north transept where they are amply and clearly able to be heard from the nave both in liturgical works and in leading and complementing the cathedral’s customary vigorous congregational hymn-singing. The current cathedral choir was formed in 1970 and is an all male choir in the English choral tradition. The choir sings at the 10:00am mass every Sunday

St Stephen’s is a gothic revival cathedral with a cruciform shape in plan. While this is a plain cathedral by comparison it still has a selection of striking features such as the spire topped sandstone towers, imported stained glass windows from Munich, the organ, the altar and the newer Blessed Sacrament Chapel at the rear of the building. Of particular note is the stained glass window by Harry Clarke, known as the “Mayne” window, which is located above the sanctuary on the east wall. The cathedral is made predominantly of Brisbane tuff and freestone. The Blessed Sacrament Chapel is made from reinforced concrete and the restored spires from glass reinforced concrete

Tours are available of the Cathedral   http://www.cathedralofststephen.org.au/visiting.htm

In the presence of a congregation that filled every portion of St. Stephen’s Cathedral the Apostolic delegate (Monsignor Cattaneo) yesterday unveiled and dedicated two stained glass windows which form on of the principal features of the new portion of he building.

The subject for the Naughton window, “The sermon on the mount,” a very difficult one to treat in stained glass, has been skilfully arranged to achieve balance, and, at the same time, to preserve the dignity and meaning of the subject. Christ is depicted preaching to the multitude, who are gathered around Him, intently listening to the words of our Lord. In the tracery are shown attending angels, with scrolls bearing words embodied in the sermon delivered on the mount, and the base of the window carries scrolls bearing other quotations from the sermon. The beautiful blue in the tracery is noted for its richness, and the colour of the whole is in perfect harmony. The window is a fine example of what can be produced in Brisbane. The glasses were carefully selected in London by R. S. Exton and Co., Ltd.
The celebration of high mass followed the blessing of the windows, the Rev. Father Walter Cain being the celebrant, Rev. Father David Dee deacon, and the Rev. Dr. Kelly sub-deacon. Monsignor Cattaneo presided on the archiepiscopal throne, and his Grace Archbishop Duhig occupied a chair on the epistle side of the high altar.

“The occasion of the unveiling and blessing of the latest memorial windows to adorn our now completed pro-cathedral,” he said, “is one of very special interest, not only on account of its being marked by the presence of the personal representative of his Holiness the Pope, but also because it affords us a revelation in Irish and local stained glass work.” They were face to face, that morning, he added, with what was probably the finest sample of the glazier’s art ever introduced into Australia. His Grace proceeded to trace the history of stained glass, and pointed out that Gothic architecture and stained glass had ever gone hand in hand. Stained glass, he said, was always likely to remain the auxiliary or handmaid of Gothic architecture. 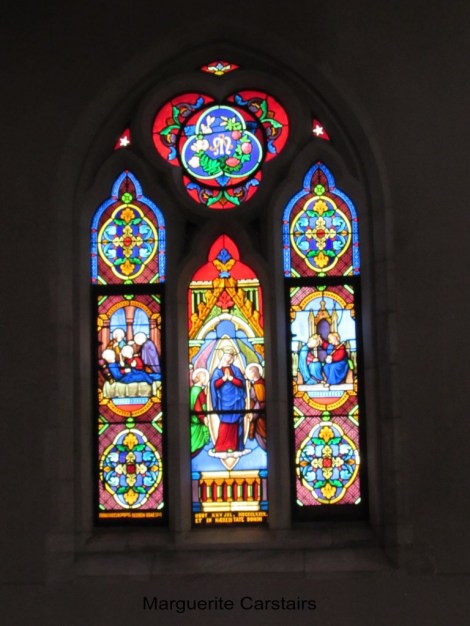 Inside the cathedral the stained glass windows are vividly illuminated by the sun and cast coloured patterns on the floor and walls. Some of them are small with intimate pictures of Christ and his followers, while the great window over the main door stands tall and proud as it depicts Christ’s ascension, then casts its majesty down the length of the great space.

St Stephen’s is a gothic revival cathedral with a cruciform shape in plan. While this is a plain cathedral by comparison it still has a selection of striking features such as the spire topped sandstone towers, imported stained glass windows from Munich, the organ, the altar and the newer Blessed Sacrament Chapel at the rear of the building. Of particular note is the stained glass window by Harry Clarke, known as the “Mayne” window, which is located above the sanctuary on the east wall. The cathedral is made predominantly of Brisbane tuff and freestone

Looking at the window, they would perceive that it was divided into two parts, upper and lower. Above they had the magnificent figure of the risen Saviour standing as on a jewelled sea, looking down on and blessing the disciples as he soared aloft to heaven below, in the centre was His Virgin Mother, with a countenance of exquisite beauty, heightened by a look of mingled sorrow and compassion

In addition to the cathedral, the site contains numerous buildings that support the cathedral and the Archdiocese of Brisbane.

St Stephen’s Chapel stands immediately to the south of the cathedral. The chapel was designed by English architect Augustus Pugin and built between 1847 and 1850. The first Mass was celebrated in the completed building on 12 May 1850. In June 1859 it became the cathedral for the first Bishop of Brisbane. It is the oldest Catholic church in Queensland. 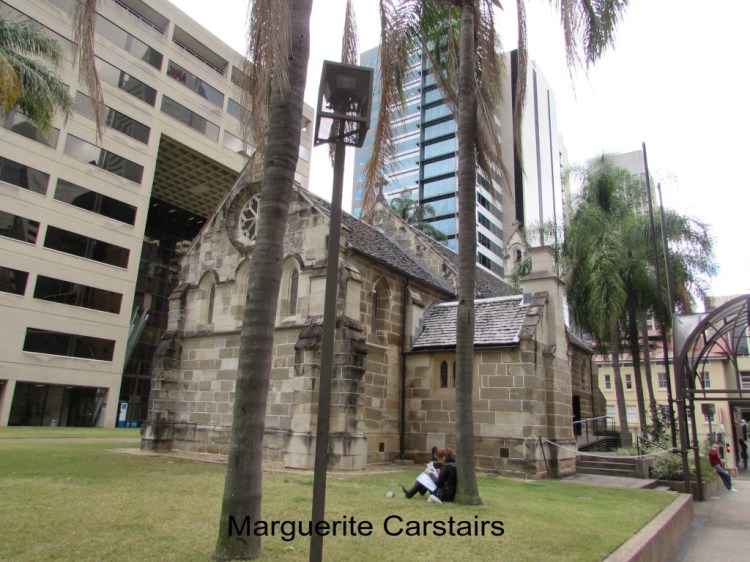 In addition to the cathedral, the site contains numerous buildings that support the cathedral and the Archdiocese of Brisbane.

St Stephen’s Chapel stands immediately to the south of the cathedral. The chapel was designed by English architect Augustus Pugin and built between 1847 and 1850. The first Mass was celebrated in the completed building on 12 May 1850. In June 1859 it became the cathedral for the first Bishop of Brisbane. It is the oldest Catholic church in Queensland.

The Francis Rush Centre was completed in July 2005. The two storey building is the location for the cathedral’s administration centre, the offices of the bishops, the choir room and several function and meeting rooms. A new under cover outdoor liturgical space was constructed as part of this development and facilitates special liturgies such as the Easter Vigil and Palm Sunday. 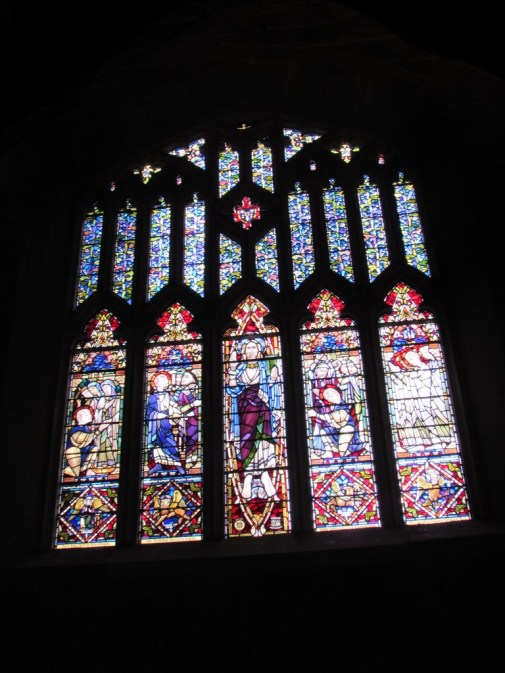 The declaration, received on May 6, follows a request from Archbishop John Bathersby of Brisbane who petitioned the Congregation for Divine Worship for Mary to be made diocesan patron.

Archbishop Bathersby said the Australian woman’s “deep faith, energy, courage, vision and contribution to Catholic education made her a most appropriate patron for the archdiocese”

The shrine was established in 1999 after an announcement by Archbishop Bathersby that the first church building of Brisbane – the chapel beside the cathedral – would be restored and become a centre of devotion to Mary MacKillop. 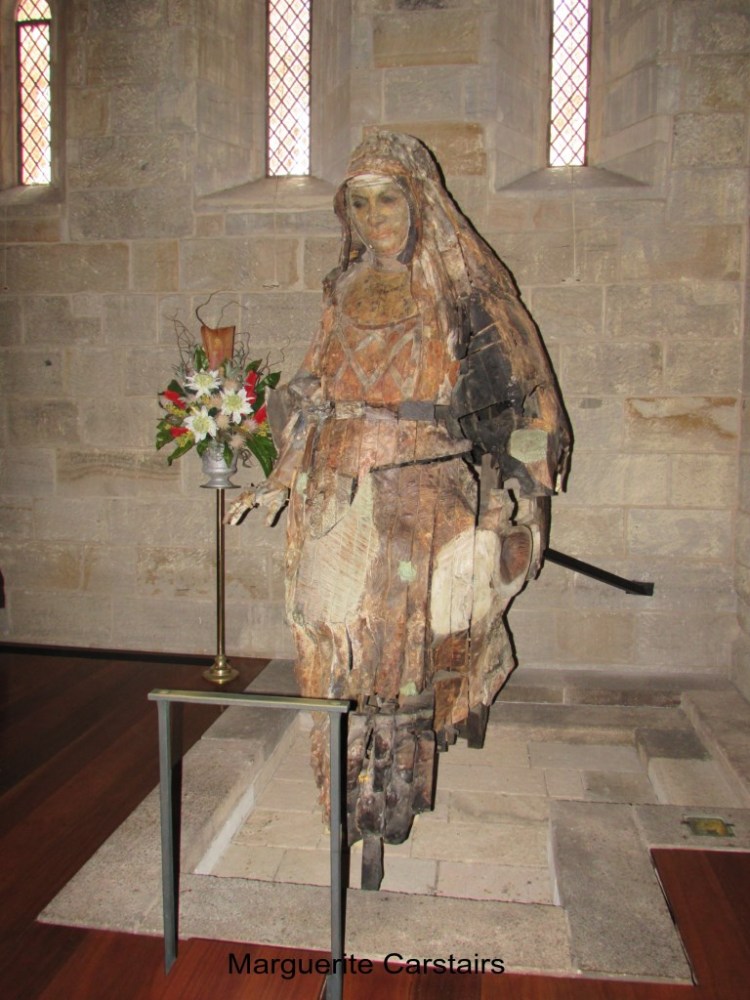 The statue is nearly nine feet tall. John Elliott, in his construction, has carved parts of the 100 year old camphor laurel tree separately and then recombined them into this wooden sculpture. You can see that the ancient tree in its rough bark recall the slab hut in which she opened her first school in Penola in South Australia and the old fence posts she passed as she travelled through the Australian bush on horseback.

Mary MacKillop and five other Sisters of St Joseph arrived in Queensland on 31 December,
1869, at the invitation of James Quinn, first Catholic bishop of Brisbane and founder of the
Catholic Education system in Queensland. The Sisters offered Catholic education to the
children of the working class in cities and isolated settlements according to the Woods-
MacKillop system of parish-based schools. By mid-January 1870 the Josephites were
teaching at St Mary’s School, South Brisbane, and by July they had opened three more
schools, two in Brisbane and the other one in the country town of Maryborough.
During the next ten years the Sisters established fifteen schools and an orphanage and were
teaching about half of the total number of children attending Catholic schools in the
diocese.

beautiful wooden panels behind the altar. If you were here in person, you would not only be able to see them but smell them. These panels have all been carved from the one camphor laurel tree; as has the statue of Mary MacKillop
The panels in the chapel and the statue were carved by Brisbane sculptor, John Elliott.

The four panels behind the altar pay tribute to Mary’s religious life as Mary Mother of the Cross, and her work encouraging the Sisters in their ministry – especially through her letter writing. The drawing allows us to discover children and Australian animals and other elements of her life and ministry.

I would now like to take you into the St Stephen’s Chapel. This little stone church was first used in 1850 when there were just 60 Catholic families in Brisbane. In 1859, with the appointment of Bishop James Quinn and a separation of Queensland from New South Wales as a state in its own right, the church became the Cathedral. When the new Cathedral was opened in 1874, this church became a school room. Both the Sisters of Mercy and the Christian Brothers conducted school in this little chapel at various times.
Our current Archbishop, John Bathersby, decided to have the chapel restored in the late 1990s as a shrine to our first saint, Blessed Mary MacKillop. The chapel was dedicated after its restoration on 5 February 1999. 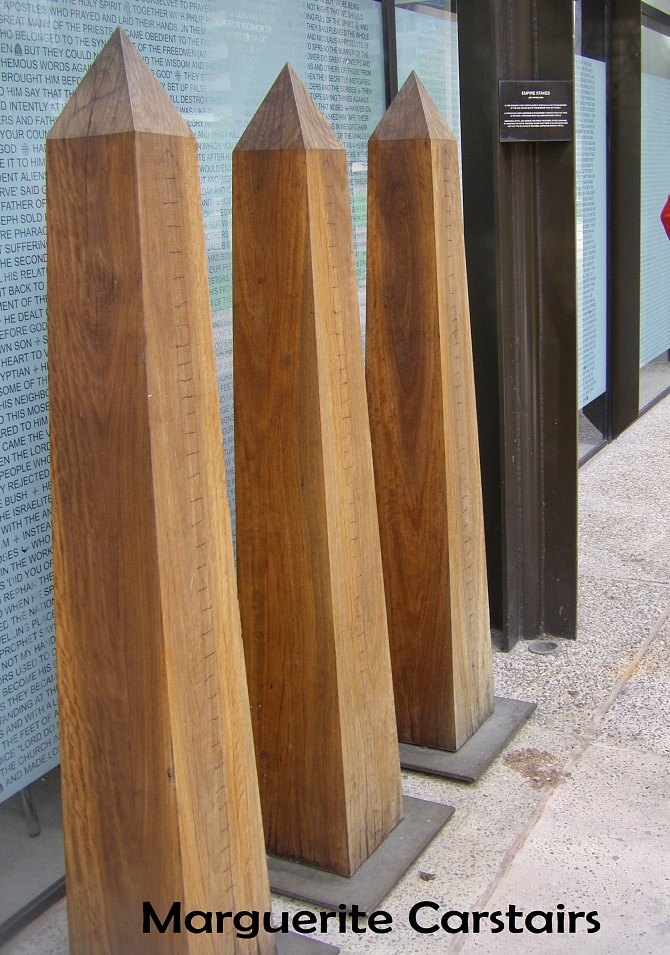 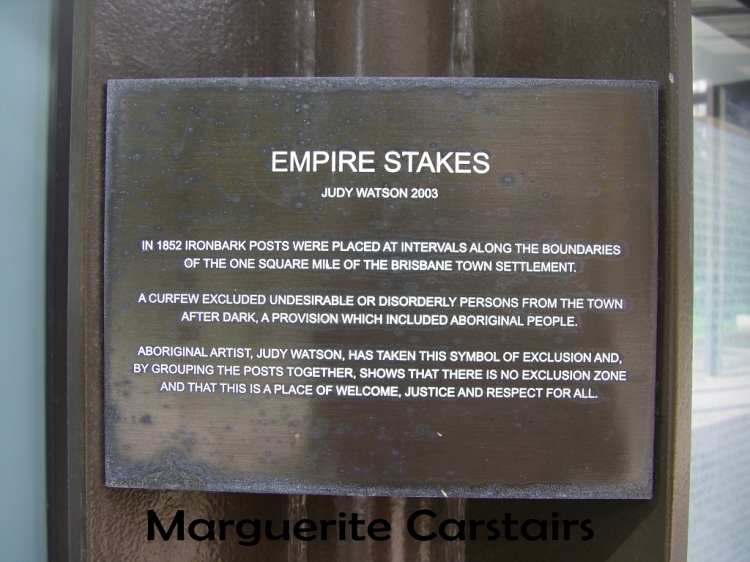