http://en.wikipedia.org/wiki/Port_Douglas,_Queensland
Port Douglas is a town in Far North Queensland, Australia, approximately 70 km (40 mi) north of Cairns. Its permanent population was 4,772 at the time of the 2011 census.The town’s population can often double, however, with the influx of tourists during the peak tourism season May–September. The town is named in honor of former Premier of Queensland, John Douglas. Port Douglas developed quickly based on the mining industry. Other parts of the area were established with timber cutting occurring in the area surrounding the Daintree River and with settlement starting to occur on lots around the Mossman River by 1880.

Port Douglas was No. 3 on Australian Traveler magazine’s list of 100 Best Towns In Australia 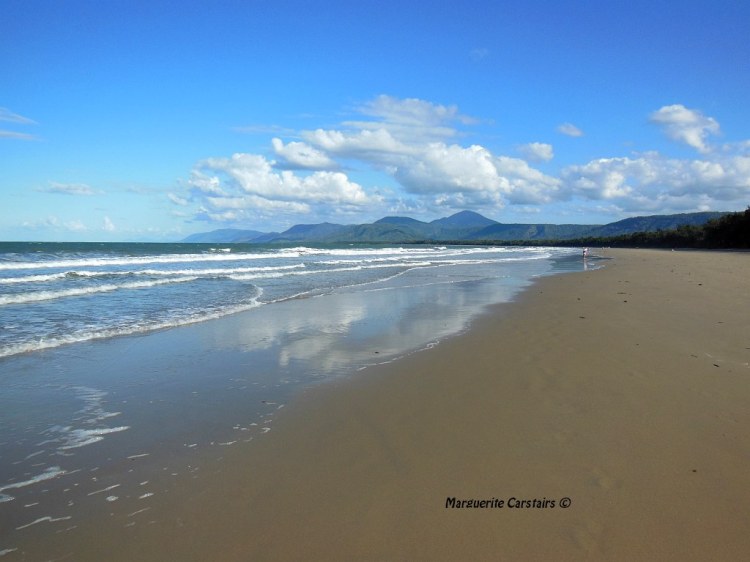 The Port Douglas township was established in 1877 after the discovery of gold at Hodgkinson River by James Venture Mulligan. It grew quickly, and at its peak Port Douglas had a population of 12,000 and 27 hotels. With the construction of the Mulligan Highway it serviced towns as far away as Herberton.

When the Kuranda Railway from Cairns to Kuranda was completed in 1891, the importance of Port Douglas dwindled along with its population. A cyclone in 1911 which demolished all but two buildings in the town also had a significant impact. At its nadir in 1960 the town, by then little more than a fishing village, had a population of 100.

In the mid-1980s, tourism boomed in the region after investor Christopher Skase financed the construction of the world-class Sheraton Mirage.

There is a station here that does a tourist trip on Sundays and the Marina is edged with restaurants and tour shops for diving and trips to the Barrier Reef. There is a local bus that travels to town from here at the cost of $4 a ride.

The town has a major street of many tourist shops, clothing, travel, restaurants, Foodworks, Coles and a target for good budget wear. There is Mary’s Church and a park at the end of the street where there is a Sunday Market.

I did not enjoy my Port Douglas experience as I found it an aloof place with no soul or life. Maybe I was moving in the wrong circles. I saw very few smiles at Port Douglas and everyone seems to walk along with their head hanging down avoiding eyes.

I stayed at the Portsea Mantra which looks a very luxurious Resort, where the rooms surround a central multi-pool area where even the children swim with muted voices.