Dimbulah is situated on the northern side of the Atherton Tablelands within the
Mareeba District in the Far Northern Region. From Dimbulah, it is about thirty minutes
to Mareeba and ninety minutes to Cairns. It is situated approximately 2000 kilometres
from Brisbane. The main road passing through Dimbulah is the Burke Developmental
Road. This road continues on to Chillagoe with access to the Gulf Region of
Queensland. The divisional neighbours to Dimbulah are Mareeba to the east, Mt
Molloy and Laura (Cairns Division) to the North, Mount Garnet to the southwest and
Herberton to the south. The Walsh River flows through the centre of the division.
Dimbulah is an aboriginal word meaning “Long Waterhole” and is possibly attributed
to the fact there is a river nearby called the Walsh River. Dimbulah was first settled
when gold was discovered on the Hodgkinson area to the north in 1876. Situated
about 1 1/2 hours drive from Cairns which has all the amenities of a big city.

The Junction Hotel was famous for its longest Bar in the Southern Hemisphere, but today it is half the size it once was. Next door is the Old Picture Theater which does not screen films anymore. 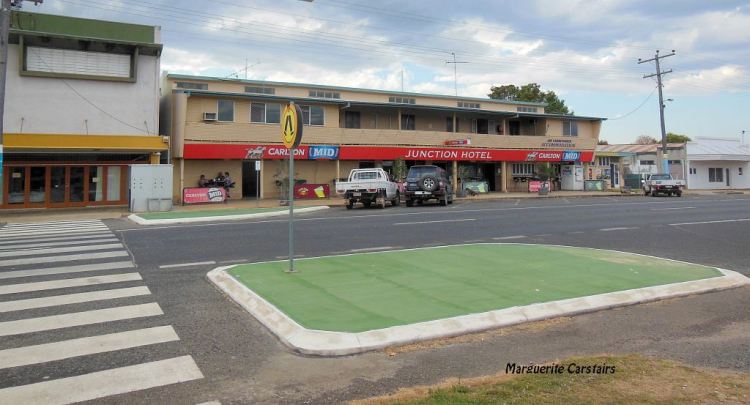 The population of Dimbulah is about 500 people. A high proportion of these persons
are of European background, their ancestors having immigrated to Australia.
Mutchilba is another small centre with approximately fifty people residing in the small
township. The remainder of divisional population of approximately 1000 people reside
on small farms. The division has some large cattle properties within the boundaries.

The name Dimbulah is an aboriginal term for “long water hole” referring to the Walsh
River, which runs from Herberton to the south of Dimbulah on the Atherton Tableland,
through Dimbulah to the gulf country west of Chillagoe. Dimbulah was at first set up
purely as a railhead between the mining towns of Chillagoe and Mt Mulligan. The
areas surrounding Dimbulah were once mined for minerals such as Wolfram
(Tungsten), coal and gold and the Ports at Cooktown, Port Douglas and Cairns grew to
accommodate this industry in the late 1800s. The Dimbulah police station is the old
Mt Mulligan Court House, which was transported, via rail, to Dimbulah in about 1957.
Mt Mulligan was a mining town first laid out in 1913 north of Dimbulah. In 1921 an
explosion in the mine killed seventy-five miners and eventually it closed in 1957. The
now semi-deserted areas of Kingsborough, Wolfram Camp and Thornborough once
had established police stations. Today all that is left are old cemeteries, mining pits
and quarries with a few people still residing at these locations. The areas surrounding
Dimbulah to the west, such as Petford and Emuford were also once large tin mining
areas. However, these areas were eventually abandoned with the decrease of tin
prices in the mid 1950’s. In the 1880s on the banks of the Hodgkinson at
Thornborough a minor war erupted with European gold miners fighting and killing a
number of Chinese miners who had attempted to jump one persons claim. Fifty-seven
Chinese miners were killed in the melee and five Europeans were killed with twelve
severely injured.
In the late 1950’s the areas surrounding Dimbulah was opened up for farming
purposes and immigrants from Italy and Croatia commenced farms in the area,
growing tobacco. The water irrigating these farms came from the Tinaroo dam; over
an hours drive away at Lake Tinaroo via a series of channels, which still today is
regarded as a major engineering achievement.

The Railway Station is also a Museum with a history of the area. The train travels once a week, Wednesday going from Mareeba to Chilligo and Saturday the return journey. If there is a big load of passengers there are two carriages. Sometimes there is very few on the train…

This is how the original people used to travel. There were no roads, just a track, and people would pile all their belongings into a wheelbarrow and push it to where they were going to live.  They would be going to work in the mines, or simply moving to a better home. The race is in memory of that era.