Carnarvon Gorge is between Roma and Emerald. From Roma, drive 90 km north to Injune then a further 160 km along the Carnarvon Highway. From Emerald, drive 65 km south to Springsure then 70 km east to Rolleston, and a further 61km to the Carnarvon turnoff. The 45 km road to the park has 15 km of unsealed gravel surface. This road can become impassable after rain and is suitable for conventional vehicles and caravans in dry weather only.

I was on my way to work as chef at Rolleston Hotel and decided to stay here for a week before the job started. I booked into Tarraka Lodge where you can camp with your own tent and caravan, in my case a campervan.

The road into the Gorge was unmade and as it got nearer became steeper and steeper and I barely crawled to the top. It was just as scary driving back down to return home. I was quite relieved to see the Lodge which was reached by driving over a stony river through straight to the Office and Camping area, which was excellently equipped and beautiful to stay at. I chose to camp as far away from other campers  and really enjoyed the peace here with birdsong and night sounds.

The main gorge walking track crosses Carnarvon Creek many times as it winds the 9.7 km from the information centre to Big Bend. Side-tracks from the main gorge track lead to a range of sites. The track is mostly flat, although the side-tracks involve steeper sections.

The featured sites on side-tracks can be combined to create one-day walks. For example, the Moss Garden, Amphitheatre, Ward’s Canyon and the Art Gallery sites can be visited on a 14 km return one-day walk.

Download a copy of the Carnarvon Gorge walk planner (PDF, 37K)* to help plan your walks. 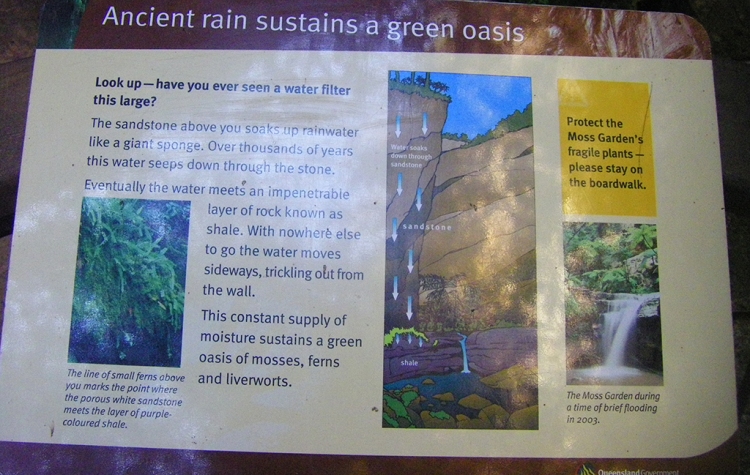 This was very beautiful. The water is actually filtered through the sandstone, however, the animal droppings and other debris make this not suitable for drinking. It is a haven for the beautiful ferns and moss that edge the walk and the pool

It was damp here and very cool in the shade and moss grew on every rock in deep colorful heaps of green.

With many shades of green, the Moss Garden is a rich mosaic of mosses, ferns and lichens. Here the micro-climate sustains a lush rainforest environment. Some sections of track have steps and an elevated boardwalk. 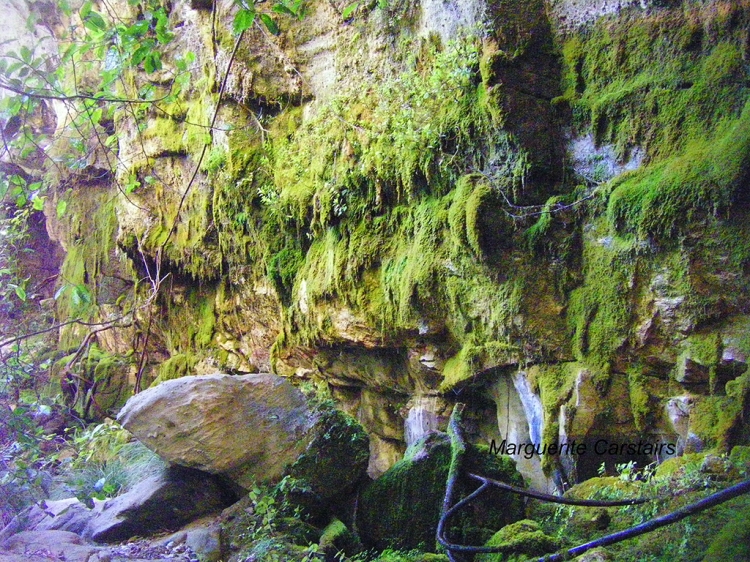 Carnarvon Gorge’s landscapes have largely been shaped by water erosion. Over the last twenty seven million years Carnarvon Creek, which winds for over 30 kilometres (19 mi),has carved down through six hundred metres of stone, exposing rocks from three significant phases of Queensland‘s geological history including two sedimentary basins, the Bowen and the Surat, and the Buckland Volcanic Province. The youngest rocks in the area are the igneous basalt rocks of the Buckland volcanic Province which were laid down between 35-27 million years ago to depths of up to 300 metres.  The basalt layer is present on top of the high country either side of the Gorge where it protects the landscape from erosion and generates significantly different soils to those derived from the lower sedimentary rocks. Boulders eroded from the basalt layer dominate the Gorge’s waterways due to their ability to resist water erosion better than the sedimentary rocks they once overlaid.