The bush curlew who live at Lamb island seem to defy some of the descriptions I am reading online when looking for information to add here.

They may feed at night but they wander around all day and are always happy to come and eat scraps of meat or bread if it is offered. In fact they get accustomed to being fed and stand out there screaming until I appear and either feed them, or acknowledge their presence and go back inside.

They may live in the bush but the curlews at my place live under the house, had had their eggs under the house, and have lived under the house for as long as the neighbors have lived here, which is a very long time. When the young hatch, they wander around with the parents until the next mating time, when the young bird gets in the way, and eventually he disappears to start his own family somewhere, and the curlews have a new baby the following year. They lay the egg out in the garden or somewhere in the grass, and the female sits on it and when she goes to find food, the male sits on the egg too. Often the egg is left unattended for people to have a look at, but the birds do come back.

They are not too good as parents. They cross the roads and expect the young to follow and keep up. One tiny baby the size of a golf ball, fell, and my neighbor watched the father poke it telling it to move,  and eventually leaving it there. She carefully collected the young bird and placed it back in my garden where it eventually got better and grew to be a young curlew… 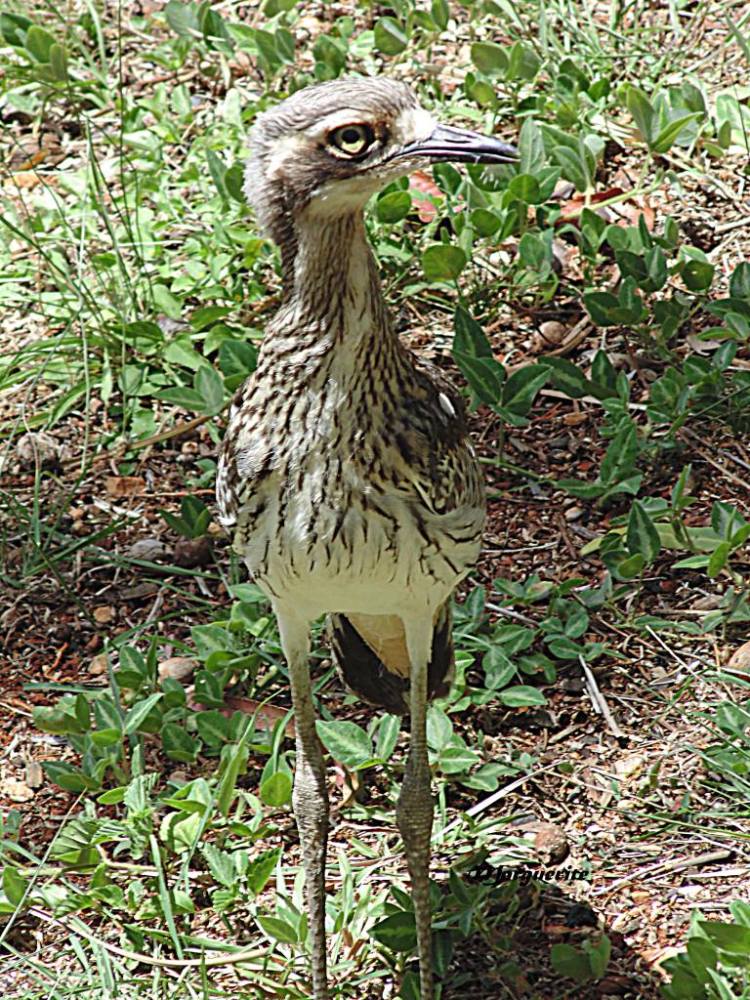 They scream all night. The call is like a petulant child screaming its distress. Sometimes they call when they want attention, and they also call out during the day. They live in the garden and they are quite tame and quite placid. If you are working in the garden and suddenly hear a hiss like a snake, you look down to see a curlew you have almost walked on. He does not move, just stands or sits there and hisses so you know he is there. They look like stone statues in the garden, and I love them.

The legs are spindly, and when they sit the leg bends forward….our legs bend back…and they sort of sit with their legs out in front of them looking quite odd.

I love their beautiful huge eyes… 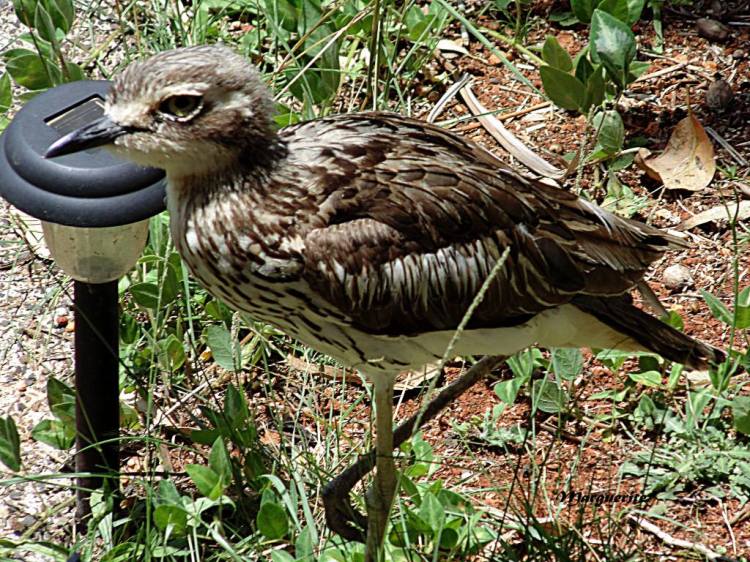 Most houses in Lamb island have curlews, and you often see them walking on the roads. The ones in my garden also go to get scraps from next door and across the road. They know who is feeding and what they are feeding and they go visiting at the times people are outside, along with the bandicoot who also goes from home to home.

The Bush Stone-curlew or Bush Thick-knee (Burhinus grallarius, obsolete name Burhinus magnirostris) is a large, ground-dwelling bird endemic to Australia. Although it looks rather like a wader and is related to the oystercatchers, avocets and plovers, it is a terrestrial predator filling a similar ecological niche to the roadrunners of North America.

Like most stone-curlews, it is mainly nocturnal and specialises in hunting small grassland animals: frogs, spiders, insects, molluscs, crustaceans, snakes, lizards and small mammals are all taken, mostly gleaned or probed from soft soil or rotting wood; also a few seeds or tubers, particularly in drought years. Birds usually forage individually or in pairs over a large home range, particularly on moonlit nights.

During the day, Bush Stone-curlews tend to remain inactive, sheltering amongst tall grass or low shrubs and relying on their cryptic plumage to protect them from predators. When disturbed, they freeze motionless, often in odd-looking postures. For visual predators like raptors (and humans), this works well, but it serves little purpose with animals that hunt by scent such as foxes, dingoes or goannas.

Despite their ungainly appearance and habit of freezing motionless, they are sure-footed, fast and agile on the ground, and although they seldom fly during daylight hours, they are far from clumsy in the air; flight is rapid and direct on long, broad wings.

When threatened (presumably in the presence of a nest), they may raise their wings wide and high in an impressive threat posture and emit a loud hoarse hissing noise.

In many Australian Aboriginal cultures Bush Stone-Curlews have close associations with death.

One example is the story of the Curlew Wayayi on the Tiwi Islands to the north of Darwin. The following story comes from Munupi Arts & Crafts Association at Pirlangimpi (Garden Point) on Melville Island.

Mudungkala, an old blind woman arose from the ground at Murupianga in the South East of Melville Island. Clasping her three infants to her breast and crawling on her knees she travelled slowly north…….

…….But he did not escape the decree of Purrukapali, for even though his is eternally reincarnated, he has to die for three days every month. One can see on the face of the moon man the wounds that he received in this fight with Purrukapali.

Bima, still bearing scars on her head, became Wayayi, the curlew bird that still roams the forest at night, wailing in remorse for her misdeeds and for the child that she lost.

And another cautionary tale for mothers…..The Ngamirlirli bird calls out at night going kiwirlirli-kiwirlirli. If it calls out like this at night somewhere near where people are sleeping and if a mother hears it and does nothing about it, then her child might throw a trembling fit – that’s if the curlew calls out…

It is interesting that Aboriginal people keep away from the curlew and will not go into areas where they live….they consider it a bird of bad luck and a harbinger of death.

The bush stone-curlew is one of the state’s most recognisable woodland bird species, with its gangly legs and distinctive ‘weer-loo’ wailing call (MP3 – 562KB).

But if you see one of these birds, count yourself lucky. Numbers have declined greatly over the last century – mainly due to the threat of foxes and loss of the bird’s woodland habitat.

The bush stone-curlew is now endangered in NSW, and experts worry that in 10 or 20 years, it will be too late to prevent the species from becoming extinct.

3 thoughts on “Curlews on Lamb Island”