South of Birdsville you drive the Birdsville track through the Strzelcki Desert.

This is white sands powdery fine known as Bulldust. It is very dusty and at times the bulldust collects along the roads and it can be slippery.

The roadsides are rich with wildflowers in September 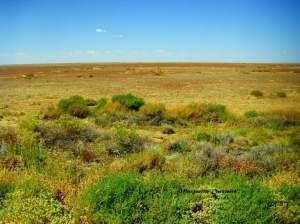 The Strzelecki Desert /tʃəˈlɛtski/[1] is located in the Far North Region of South Australia, southwest Queensland and western New South Wales. It is positioned in the northeast of the Lake Eyre Basin, and north of the Flinders Ranges. Two other deserts occupy the Lake Eyre Basin—the Tirari Desert and the Simpson Desert. The desert is characterized by extensive dune fields and is home to three wilderness areas. It was named after the Polish explorer Paweł Edmund Strzelecki by Charles Sturt.[2] He was the first non-indigenous explorer in the area, followed closely by the ill-fated Burke and Wills expedition.

Much of the desert is preserved within the Strzelecki Regional Reserve in South Australia.[3] Parts of the eastern sections of the desert are protected by the Sturt National Park. A population of the endangered Dusky Hopping Mouse lives in the desert.

The Cobbler Sandhills near Lake Blanche is a section of the Strzelecki Desert where the dunes are replaced by small eroded knolls, mostly with vegetation on the top.

This area provided great difficulty for early attempts to cross the desert by car, and the name relates to the sheep which were the most difficult to shear, known as the “cobblers”.

The Desert stretches from Birdsville fifty to sixty Kms down the Birdsville Track….