Boodjamulla (Lawn Hill) National Park is one of Queensland’s most significant geological parks, with interesting rocks and landscapes spanning hundreds of millions of years

The red, hard sandstone in the eastern part of the main Lawn Hill Gorge and along the Constance Range was originally a blanket of sand deposited in an ancient shallow sea, about 1560 million years ago. Ripple marks from that ancient seabed are still visible in places in the sandstone today. Life in those Proterozoic times amounted to little more than bacteria and mats of algal-like organisms called stromatolites.

Much later, in Cambrian times (approximately 530 million years ago), another shallow sea formed, lapping up against the old sandstone hills from the south and west. Lime- and silica-rich sediments and remains of sponges and trilobites (primitive marine animals with hard shells) accumulated to form layers of limestone. Fish had not yet evolved. These grey limestones containing chert (silica) now occur in upper parts of Lawn Hill Gorge and west of Riversleigh.

Over millions of years the sandstones and limestones have been gradually stripped away by erosion. The Constance Range is gradually being eroded westward by the headwaters of the Gulf streams. Lawn Hill Creek and other similar streams were once at a higher level, but have cut down through the limestone and sandstone along prominent fractures, forming gorges.

In the Riversleigh area, much younger pale-grey limestones, deposited between 25 and 15 million years ago in Tertiary times,  lie on top of the older Cambrian limestones. The younger limestone was deposited in small rainforest lakes that flourished in the wetter climate of the time. This limestone has become famous for the innumerable fragments of fossil vertebrate animals it contains. Early relatives of today’s fauna fell, or were washed into those lakes, and were preserved for posterity in the lime-rich sediments. 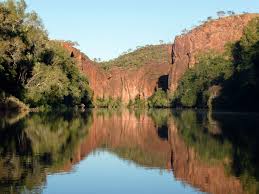