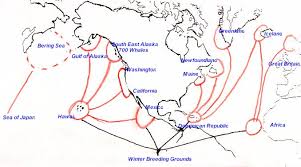 http://www.discoverherveybay.com/Whales/humpback2.htm
Humpback whales migrate from Antarctica to the sub-tropical coastal waters of western and eastern Australia and Fiji to give birth and mate during winter and spring.Each year at least 1200 humpbacks migrate 5000km to the eastern coast of Australia. Groups of whales or ‘pods’ start to arrive at the southern Great Barrier Reef in mid-June and in the following weeks they move further along the Great Barrier Reef concentrating in the southern Whitsundays area. On the southern migration back to Antarctic waters, a large proportion of the whales stop over for a few days in Hervey Bay. Most humpbacks will have left the Queensland coast by the beginning of November.

The Humpback whales that visit Australia’s coastal waters spend their summer months feeding in the Antarctic. With the onset of the southern hemisphere winter the Humpbacks migrate an average of 2,500km from polar waters to their tropical breeding grounds, undertaking some of the longest migrations in the animal kingdom. Although similar migrations of the same species occur in the northern and southern hemispheres, the two populations never interbreed, even where they use the same equatorial breeding waters, because the northward and southward convergences on tropical waters occur six months apart. Whereas most migrating whales avoid land masses, the Humpbacks follow the coastline reasonably close to shore, which makes them an ideal 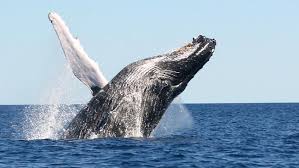