The Old Windmill is situated in a very beautiful area with the park behind with some very beautiful old trees and walks. Its a steep climb down some steps to Central Station, but really worth the effort. 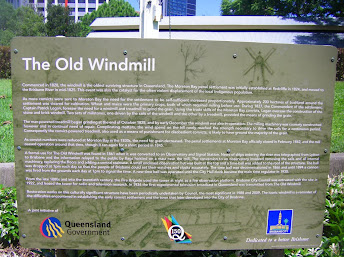 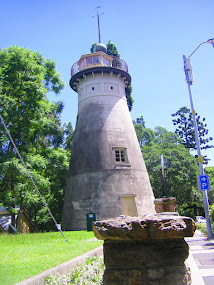 The Old Windmill is located in Wickham Park, on Wickham Terrace in Spring Hill,Brisbane, Queensland, Australia. According to the heritage notice (shown at left), it is the oldest surviving building in Queensland.

After the murder of two members of a surveying party near Mount Lindesay in May 1840, three Aboriginal men were apprehended and tried for the crimes. In July 1841, the two surviving Aborigines were hanged from a beam from an upper window of the windmill.[2]

On 20 January 1862, the Old Windmill became the first home of the Queensland Museum.

The Old Windmill was later used as a signal tower, and is now used as a weatherobservatory. Towards the end of the 19th century, the tower was encased in a cementrender to protect the brick and masonry from rainwater damage. The current render dates from a 1988 refurbishment, and is scored to imitate the stone blocks it covers.

From 1922 to 1926 the tower served the Institute of Radio Engineers for meetings and experiments, Gympie Radio Pioneer A. E. Dillon 4CH, was the first experimenter to conduct MW tests and transmissions from this tower in late 1921 or early 1922. The Tower was ideally suited for this purpose as it commanded a panoramic view from Moreton Bay in the east, to Darling Downs on the western horizon. Nearby he erected a 150 feet (45m) mast and strung an 80 feet (24m) antenna between it and the Tower – the most impressive configuration of its kind in Queensland at the time.

During the 1930s and 1940s the tower was the venue for pioneer television broadcasting.