Southeast Queensland’s second highest mountain, the ruggedly striking Mt Barney, in Mt Barney National Park, has several routes up its two granophyre peaks. However, they’re either unmarked or barely marked and require bushwalking experience and navigational skills. Avoid triggering a rescue effort by hiring a local guide, at least for your first ascent.

Mt Barney National Park is part of the Gondwana Rainforests of Australia World Heritage Site. In addition to leading you up the 1351m East Peak, enthusiastic Mt Barney Lodge Country Retreat co-owner Innes Larkin will point out mountain flora and present you with a steamy mug of local coffee at the top.

Part of a granite intrusion that underlies the Bellenden Ker Range in Queensland’s Wooroonooran National Park, 922m Walshs Pyramid is the focus of the annual Great Pyramid Race, where competitors run from nearby Gordonvale to the summit and back again. It’s difficult to appreciate their feat until you’re well into the steep and largely unshaded 6km return summit walk, and a certain broad rock delivers the cruel information that you’re only half-way. Keep going, though – the views over sugarcane fields, Gordonvale, and the surrounding hills are worth the effort.

After descending, drive up the Gillies Hwy to Lake Eacham, where you can lose all evidence of your sweat in the cool, blue waters.

The Glass House Mountains, a series of dramatic volcanic peaks, dominate the Sunshine Coast hinterland. And while some are too precarious for hiking, others invite footprints. Although its 2.2km return track is steep and gnarly in places, 253m Mount Ngungun’s summit gives visitors an intimate audience with spirelike 377m Coonowrin and pyramid-shaped 556m Mount Beerwah as well as a profile view of 364m Mount Tibrogargan’s gorilla-reminiscent countenance. Prior to ascending, read up on the mountains’ Aboriginal creation legend, and then spend some of your summit time pondering their sorry situation. 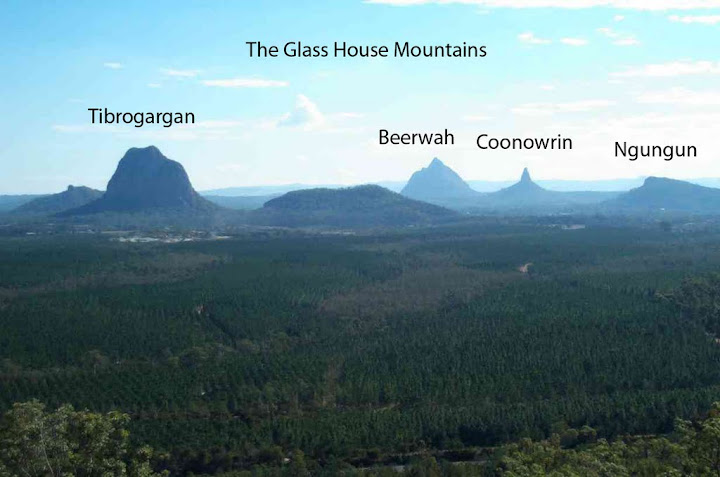 One thought on “Mountains to Climb in Queensland”

Just back from an Easter trip to Carnarvon Gorge, central QLD, Australia