The Brown Booby (Sula leucogaster) is a large seabird of the booby family, Sulidae. The adult brown booby reaches about 76 centimetres (30 in) in length. Its head and upper body are covered in dark brown, with the remainder being a contrasting white. The juvenile form is gray-brown with darkening on the head, wings and tail. While these birds are typically silent, bird watchers have reported occasional sounds similar to grunting or quacking.

Their heads and backs are black, and their bellies are white. Their beaks are quite sharp and contain many jagged edges. They have short wings and long, tapered tails.

This species breeds on islands and coasts in the pantropical areas of the Atlantic and Pacific oceans. They frequent the breeding grounds of the islands in the Gulf of Mexico and the Caribbean Sea. This bird nests in large colonies, laying two chalky blue eggs on the ground in a mound of broken shells and vegetation. It winters at sea over a wider area.

Brown Boobies are spectacular divers, plunging into the ocean at high speed. They mainly eat small fish or squid which gather in groups near the surface and may catch leaping fish while skimming the surface. Although they are powerful and agile fliers, they are particularly clumsy in takeoffs and landings; they use strong winds and high perches to assist their takeoffs.

This booby came aboard about 3pm and stayed in the same spot until the next morning. He may have been a younger bird. He was obviously very tired. At night he simply put his head under his wing and slept standing in the same position. 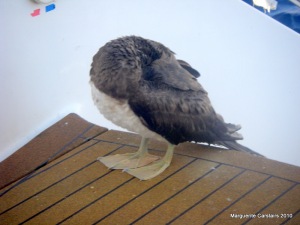 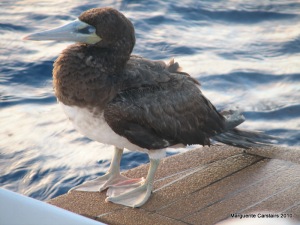