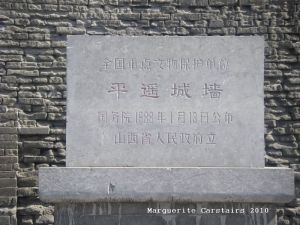 With a total length of six kilometers (about four miles), the city wall is about 12 meters (about 40 ft) tall and 3 to 6 meters (about 10-20 ft) wide on top. The wall is of compacted earth covered by bricks and stones. 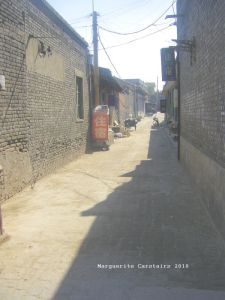 The Ancient City is listed with UNESCO
http://whc.unesco.org/en/list/812/
Ping Yao is an exceptionally well-preserved example of a traditional Han Chinese city, founded in the 14th century. Its urban fabric shows the evolution of architectural styles and town planning in Imperial China over five centuries. Of special interest are the imposing buildings associated with banking, for which Ping Yao was the major centre for the whole of China in the 19th and early 20th centuries.
See the video:

The Ancient City of Ping Yao is an outstanding example of a Han Chinese city of the Ming and Qing Dynasties (14th-20th centuries) that has retained all its features to an exceptional degree and in doing so provides a remarkably complete picture of cultural, social, economic, and religious development during one of the most seminal periods of Chinese history.

The Ancient City is encloded within the walls.

There is a very good map available for sale in English for 5 yuan. You can follow the map and see the different areas. You can also hire a small tour open taxi that will take you around the city.

We walked the main street where there were many vendors selling artifacts and craft items and food, and we did not go into any of the buildings because I did not know we could. Everything is written in chinese making it difficult unless you have the map open in your hand.

The buildings all look like homes, and there are residences open to the public, also Temples and public buildings. There is an entrance fee for these which is possibly why we did not go inside.

It is a walk back into the past with old gates, and old doors and original walls and everything looking old and feeling old.